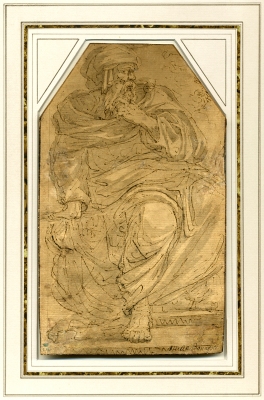 A Study
after
Michelangelo Buonarroti


Francesco Salviati was greatly influenced by Michelangelo.
He was a pupil of Baccio Bandinelli and later worked with Giorgio Vasari.
In Rome he decorated the Palazzo Farnese and Palazzo Sacchetti.
This highly fluid and deft ink study has a traditional attribution to Salviati
and may have been executed during his period with Bandinelli. 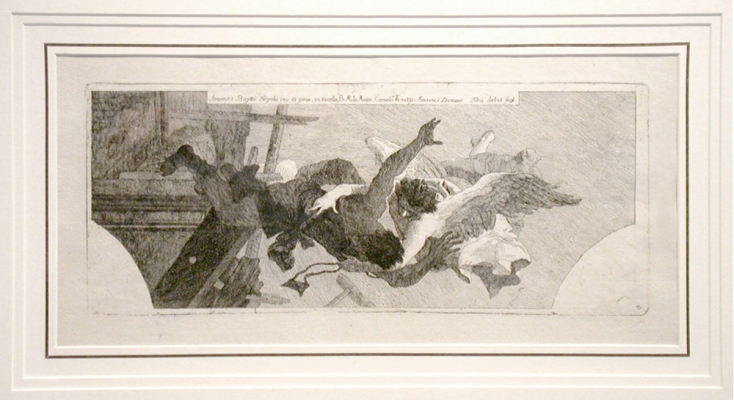 An Angel Saving a Worker (falling from a scaffold)

Giandomenico created a number of etchings based upon the frescos of his father Gianbattista Tiepolo eg. those of the Sagredo Chapel, San Francisco della Vigna, Venice etc. for a further discussion see: 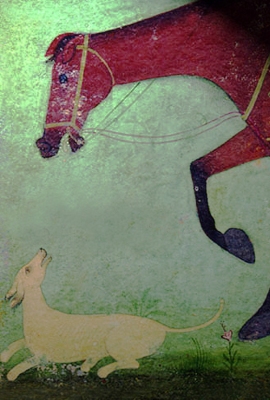 Detail of a Deccani miniature
ca. 1770's
gouache with ink and gold on wasli
9 x 6 inches

A detail of an Eighteenth Century painting from Deccan / India.

Please contact us for a current selection of paintings. 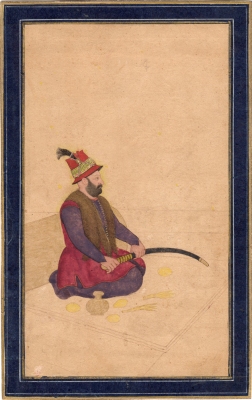 A rare and very fine contemporary portrait of Nadir Shah (1688-1747) who ruled as Shah of Persia
from 1736-1747. He became the founder of the Afsharid Dynasty after deposing the remnants of the Safavid Dynasty under Shah Abbas III in 1736. He conquered Mughal Northern India and in 1739 occupied Delhi and carried away the Peacock Throne and the Koh-i-Noor diamond prior to his triumphant return to Persia.

Nadir Shah is depicted here, naturalistically, in middle-age seated against a large bolster, both hands holding his campaign sword. He is dressed in Turkman style with fur stole and characteristic jeweled headgear with feathered aigrette.

Given the important position that Nadir Shah holds in the history of India and Persia it should be considered surprising that so few contemporary portraits of him remain. Sometimes referred to as the "Napoleon of Asia" and considered a military genius it may well be that he had little inclination to sit still for a portrait. There are however numerous extant later examples of his image, executed in the Nineteenth Century and usually in Delhi style, showing him in similar posture to the present painting, although generally depicting him more idealized, and somewhat younger. For one example (also in the Sackler Gallery Collection) see below S1986.439 where he is depicted seated in lavish surroundings and dressed in a gold-threaded tunic.

A highly relatable contemporary portrait, probably by the same hand, is in the Freer Gallery of Art and Sackler Gallery in the Smithsonian Institution Washington DC see: F1907.256

Malcolm, John "The History of Persia: From the Most Early Period to the Present Time"
Harvard University 1829 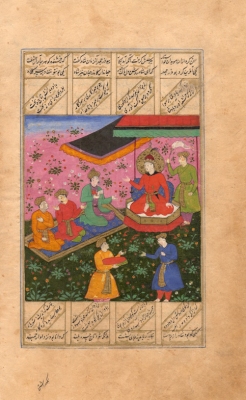 An Illustration to a Sub-Imperial Mughal
Shahnama of Firdausi

Surmounted above and below with columns of horizontal and diagonal black ink Nasta’liq script
set within black and gold ruled lines. On the verso, twenty five lines of black and red ink Nasta’liq text set within ruled columns. On the recto, paint flaking has revealed black ink underdrawing in some areas particularly on some faces.

From a scarce illustrated copy of the Shahnama of Firdausi executed in Sub-Imperial Mughal style.
The color palette, costume details, facial types and floral sprigs (depicted as floating between foreground and background) would suggest a date in the early Seventeenth Century possibly within the reign of Akbar (1542-1605) or early in that of his successor Jahangir (r. 1605-27). This manuscript was likely produced for a Muslim patron at Agra - a center of artistic activity patronized by members of the Mughal court.

The dispersed manuscript to which this leaf originally belonged contained over five hundred text folios written in very fine Nasta’liq script on highly polished paper with 25 lines to the page in four columns. Each folio with intercolumner ruled lines in black, blue and gold with some displaying cloudbands in gold. The manuscript also contained approximately sixteen miniatures and five illuminated headpieces.

Binney, Edwin “Indian Miniature Paintings From the Collection of Edwin Binney 3rd,
The Mughal and Deccani Schools” Portland 1973 cat 37 39a and 39b pps 62-64